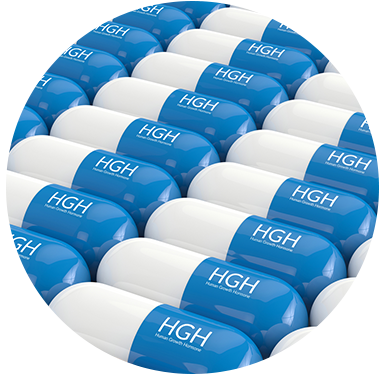 In a young and healthy body, HGH or human growth hormone, is produced naturally to stimulate cells and tissue growth and is produced by the pituitary gland.

As we age, our hGH levels typically decrease and this can result in growth hormone deficiency with some unfortunate results, including loss of:

Fatigue is also common. At Holistic Solutions we can help analyze your Growth Hormone Deficiency and if we find that your HGH levels are low, we can work with you to get your levels where they need to be. All hormone treatments are assessed through appropriate blood work, and monitoring will continue through the program.

There are different options for how to go about increasing the levels of HGH (human growth hormone) within the body. Options include stimulating the body to produce it’s own HGH, and other options involve introducing the hormone directly.

Administered via subcutaneous injection, Sermorelin is a group of peptides that very effectively stimulates HGH and other pituitary functions. It is built with the same first 29 amino acids as endogenous GH, meaning the arrangement is the same as GHRH. It stimulates the natural production of the body’s own levels of growth hormone from the hypothalamus just as endogenous GHRH, helping to replenish GH to youthful levels and aiding with deficiency. This in turn stimulates the production of IGF-1, the insulin-like growth factor.

GHRP-2 and GRHP-6 work in conjunction with Sermorelin, which would be referred to Sermoreline GRHP-2 and Sermoreline GHRP-6, to stimulate the pituitary gland to release the body’s own HGH, increasing IGF-1. While they function similarly, there are notable differences between GHRP-2 and GHRP-6.

GHRP-2 is a synthetic version of Ghrelin, an amino acid peptide that also helps to stimulate HGH production. Formed in response to hunger, it also aids in boosting metabolism.

GHRP-6 is a synthetic version of met-enkephalin, an opioid growth factor. But, GRHP-6 does not perform in the same way as an opioid, making it safe for use. GHRP-6 does not bring about the same production of HGH as GHRP-2, but instead stimulates hunger and has been shown to increase energy metabolism, so if often recommended for patients who need help with their food intake.

Acting similarly to Sermorelin, Ipamorelin is a secretagogue – it stimulates the pituitary gland to boost production of IGF-1.

We consider Sermoreline or Ipamorelin to be the safest forms of HGH treatment. Compared with directly introducing synthetic HGH or IGF-1 hormones for therapy, they help the body to produce it’s own by stimulating the pituitary gland to release these hormones.The pituitary physiology maintains a negative feedback with Sermorelin and Ipamorelin, and not with the introduction of IGF-1 and HGH. A negative feedback simply means that if there is a high level of IGF-1 and/or HGH, the pituitary is more likely to shut down the production of IGF-1 or HGH. Therefore, these options are considered the safest with HGH treatment. Often times Sermorelin and Ipamorelin are combined with a choice of GHRP-2 and GHRP-6. The major difference is GRHP-2 will make you hungry to build more muscle, whereas GHRP-6 will have considerably less of an affect on hunger.

Consult with Holistic Solutions for the recommended course of treatment for your particular situation. Call us today at (866) 296-2305.