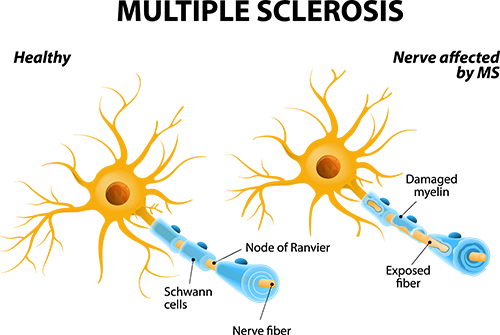 Multiple Sclerosis (MS) is a disease affecting the the brain, spinal cord, and also the optic nerves in the eyes. Some people affected by MS have only mild symptoms, but for others (reports as high as 50% of those with MS) the disease can be debilitating, preventing normal everyday function.

MS is caused by the immune system attacking myelin. Myelin is a fatty material that protects nerve fibers. When myelin is removed from the nerve fibers, the nerves become damaged and prevent proper signals being sent to the brain, preventing a person from normal muscle control, vision, balance, and other normal functions.

Symptoms of MS include:

The exact cause of MS is unknown, there are options to treat and relieve symptoms. Often, patients will be placed on a myriad of prescription drugs and medications, even muscle relaxers, all of which have their own set of harsh side effects. Interestingly, women with MS who have become pregnant have reported significant improvement of their MS symptoms during their pregnancy. This led researchers to the discovery that pregnancy hormones, HCG and Estriol, when working in conjunction with other prescribed MS medications, have been found to greatly reduce symptoms and relapses. A study conducted by UCLA neurologist Dr. Rhonda Voskuhl was presented at the American Academy of Neurology in April 2014, reporting relapses were reduced by nearly 50%.

At Holistic Solutions, all hormone treatments are assessed through appropriate blood work, and monitoring will continue through the program.

Estrogens affect many different systems within the body, including

and others. There are three forms of estrogen.

Estriol is currently the recommended course for treating MS Symptoms. Studies have found that in comparison with current MS medications, estriol offers a two-prong approach to handling MS symptoms and relapses. Medications reduce immune attacks on the brain, while estriol both reduces attacks and also protects the brain. Estriol does this through anti-inflammatory (reducing attacks) and neuroprotective properties (helping the brain to suffer less damage in the event of an attack).

Estriol is also preferred over Estradiol and Estrone as it considered to be both safe and preventive for estrogen positive cancers.

HCG, Human Chorionic Gonadotropin, is a also a hormone that is produced in high levels in women who are pregnant. HCG is produced by the placenta after implantation. As with the women who reported that during their pregnancy the severity of their symptoms was greatly lessened, patients on the HCG diet have reported similar findings. Introducing HCG in non-pregnant people, both women and men, stimulates the production of estrogen hormones. This results in a similar effect as introducing estriol.

During pregnancy Hcg levels vary during weeks 7 through 40. The HCG hormone fluctuates from 3,640IUs to 288,000IUs/day throughout pregnancy. Our HCG weight loss program uses 150-250IUs for injection per day and 500IUs oral (some of this dose will be broken down by the first pass liver metabolism).

HCG should not be used during pregnancy or breast feeding. You should not use HCG if you have a hormonal based cancer such as breast cancer. You should not use HCG during other cancers that have been shown to secrete HCG such as Barrett’s Esophagitis (not a cancer), lung cancer, adenocarinoma and testicular cancer. There is also research that indicates that HCG might be a future treatment for breast cancer. So there is some controversy around these subjects and it is best to simply not to use HCG with the above cases until more is known. Considering the low doses of HCG used during weight loss compared to present during pregnancy HCG Weight Loss is very safe.